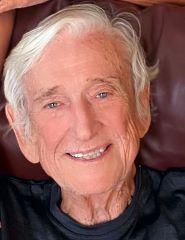 Robin Miles Sandifer, age 83, passed away on Wednesday, October 7, 2020, at home in Supply, NC. His daughter, Janet, was by his side when he passed. His son-in-law, Mathias, and Granddaughter, Stella were also present. Robin (Bob) was born on September 5, 1937, to C.R. and Marjorie (Thomson) Sandifer in Norman, Oklahoma. The family relocated to Monroe County Iowa when Bob was 5. Bob graduated Iowa State University with a Bachelor’s Degree in Agricultural Economics. He married Barbara Kenworthy and had two children, Steve and Janet. Bob’s life work was in the food industry. He worked for Wilson Foods at the onset of his career where he and his family were relocated around the country numerous times as he grew his career. He and Barbara divorced in 1978. He and Steve relocated to Marion, Ohio where he and his best friend started a ham processing plant named Honey Creek. It was in Ohio where he met the true love of his life, Barbara K. Bragg. He supported her career and relocated to Dallas, Texas in the early 1980’s when she was promoted and transferred for her work. In Dallas, he ran and operated his businesses, eventually creating TexAmerican Marketing (Flavor Source) where he led the business until his retirement in 2018. In 1997, Barbara and he relocated to Holden Beach/Supply, North Carolina where they built a beautiful home and life surrounded by wonderful friends and their pets. Bob continued to travel and work between Dallas and Holden Beach for several years. After Barbara’s death in 2011, he enjoyed spending time with his friends and daughter’s family. He was a voracious reader and liked playing bocce on the beach with friends. Left to honor Bob’s memories are his daughter Janet (Chouraki), her husband, Mathias, and daughter, Stella; sister Janet (Muhm); and several loving nieces, nephews, cousins, and friends. He will also be missed by his loving dog, Piper, and cat, Jetta. Bob will be laid to rest with Barbara at Brunswick Memorial Gardens in Shallotte, NC. Private online condolences may be made at www.brunwickfuneralservice.com Donations to Lower Cape Fear Life Care are welcome by the family. https://lifecare.org Brunswick Funeral Service, Shallotte