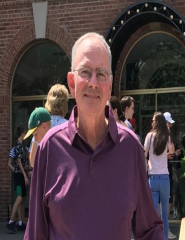 Roy Michael Elliott, age 69, died peacefully at Duke University Hospital on December 16, 2019 after complications from lymphoma. Most people knew him as Mick; a husband, father, brother, uncle, nephew, cousin, friend, neighbor, or that guy that was always outside.

Mick grew up in Philadelphia and served in the Army in Arizona prior to marrying Carol Morlock in 1973. They welcomed a son Brian in 1978 and a daughter, Laura in 1981. Mick had an entrepreneurial spirit and owned several grocery stores in the Philadelphia area. He operated those stores, which became community landmarks under his leadership, for over 30 years before retiring to St. James Plantation.

In retirement, his favorite things were the 3G’s: golf, gardening, and Grandpa-ing. He often took those to competitive levels – setting goals for his handicap or the size of his tomatoes that year. Yet when it came to his four grandchildren (Zachary, Patrick, Ashley, and Daniel), he inexplicably always lost in bike racing, board games, or biggest fish wars.

Mick rarely said “no.” “Dad, want to have a catch? Play a game? Take a dip?” Or a few years later, “Dad, can you drive me to the mall? Friend’s house? Teach me to drive? Carry boxes to my dorm?” He worked long hours, yet always said yes to his family, friends, and community. Even when his health started to fail and he had physical limitations, the answer was still always yes to “Grandpa, want to go fishing? Ride bikes? Read a book?”

Healthy or sick, he worked hard, made time for those he loved and helped everyone around him. Mick taught us to say “yes” and to serve others. Instead of a funeral service, to honor and remember Mick, dedicate time, energy, and love to your friends, family, and community. Make memories, take risks, be active, and say “yes.”

Private on line condolences may be sent to: www.brunswickfuneralservice.com