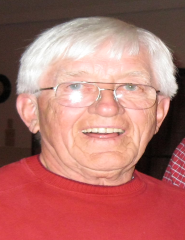 Rudolph Franz Brabetz passed away peacefully on October 24, 2020 at the age of 85 at his home in North Carolina surrounded by family. Rudolph was born April 3, 1935 in Deutsch-Leuten of the Sudeten Region of Czechoslovakia to Jan and Stefania (Zientek) Brabetz. He came to the United States from West Berlin Germany in 1955 with his mother, brother (George, deceased 1991), and surviving sister (Bea Smith of Altamont). Rudy served in the United States Army, returning to Schweinfurt, Germany in 1958. He was proud to achieve citizenship in 1968. Rudolph worked hard all his life in the Albany area, retiring from General Electric in Selkirk in 1998. He and his surviving wife Anne Joan (Hehre) realized their dream by moving to Oak Island, NC in 2002. He and Anne have been the proud parents of daughter June VanHeusen, son Stephen, granddaughters Caitlin and Dee Hildebrandt, grandson Dan VanHeusen, great granddaughters Jaia Vasquez and Lilyannah Hildebrandt-Pagan, and great grandson Jesse Hildebrandt-Carney.