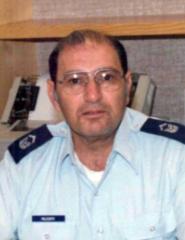 Russ was born in Paterson, NJ on November 13, 1936 to the late Rozard and Molly Polizzotti. He proudly served in the US Army for 3 years and the US Airforce for 35 years. He was a Chief Master Sargent in the 177th Tactical Fighter Group out of Pomona, NJ., a Civil Defense Coordinator for Atlantic County, NJ. He worked with the Department of Veteran Affairs in Syracuse, NY., was a post commander of the American Legion post 503 and the Elks Club of Calabash. He was a Knights of Columbus at St. Brendan’s Catholic Church in Shallotte. He was an avid bowler and loved to tinker in his shop. He will be missed by all who knew him.

The family will receive friends on Monday, August 26, 2019 from 1-3pm with a prayer service and military honors beginning at 2:30 in the Brunswick Funeral Service Chapel, Shallotte. An inurnment will be held on Wednesday, August 28, 2019 at 10am in Brunswick Memorial Gardens.

Online Condolences can be made at
www.brunswickfuneralservice.com