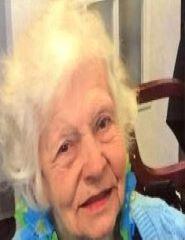 Born in Hurluck, MD on December 15, 1929, she was the daughter of the late Samuel Harold Phillips and Ruth Slacum Phillips. In addition to her parents, she was preceded in death by her son, Samuel Gadeker, her daughters, Christine Gadeker-Winter and Gail Ann Gadeker-Bloxom, her husband, Frank Reid Johnson, and brother, Harold H. Phillips.

Prior to retirement, she owned her own farm and was a homemaker.

No local services are planned.