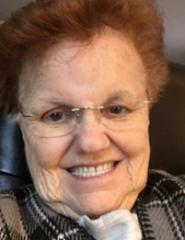 Former Anderson, SC and Ocala, FL resident Saundra Dary, 83, died February 14, 2021 at her home in Southport, NC after a long battle with cancer.  Her children Greg Dary and Cheryl Dary Shea were with her as she peacefully passed from this world into heaven.

Saundra was born in East Liverpool, OH on December 1, 1937 to Kevin and Theda Sanford.  She moved to Ocala, Florida during her high school years where she met her husband Robert.  They were married 62 years before he died in November 2020.  Saundra was a bookkeeper and office manager for many years before turning her love of knitting into a full-time business.  She sold her business before moving to Anderson, SC with her husband to retire, then to Southport, NC to be with her daughter and granddaughters.

Saundra was known by many for her generous heart and cheerful spirit.  She volunteered at Meals on Wheels, her local church, made widow baskets for the local shelters and continued to make preemie gowns for the premature babies at the Anderson Hospital.  During her later years she worked as a greeter at the Anderson Sam’s Club and was a well-known fixture to many.  Her husband often said she knew everyone, and everyone knew her!

Saundra loved living in Southport and watching the boats pass by on the Cape Fear River.  She enjoyed knitting for people and helping wherever she could and helping those who needed it.  She was an active Prayer Warrior for many people.

Saundra is survived by her daughter, Cheryl Dary Shea, and her husband Brendan Shea and their 3 daughters of Southport, NC: her son Greg Dary and his wife Theresa Dary and their 4 children of Tampa, FL.

In lieu of flowers, Saundra requested donations be made to support Pediatric Cancer. A family memorial is planned for later this year.