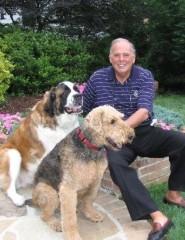 Stephen (Steve) Eugene Schwartz, 77, of St. James, NC, and formerly of Annandale, VA passed away on September 9, 2019. Steve was born on September 24, 1941, in New York City, NY, the son of Norman and Helen Schwartz. Steve worked as a Mortgage Banker for 38 years, devoting his career to supporting federal law enforcement agents and their families with home financing needs. Through his work with federal law enforcement, Steve became a passionate and active supporter of many charitable organizations with a focus on children and fallen law enforcement officers and their families. Due to his passion and commitment to the United States Secret Service, Steve was named an honorary member of the Association of Former Agents of the United States Secret Service (AFUSSS). Steve served in the Air National Guard Reserves from 1961 to 1969 Steve followed his heart, not rules. His zeal and love for life was large, earning him the well-deserved moniker, “The Big Guy” given to him by his friends. His love for life was only outweighed by his love for his family. Steve is survived by his beloved wife, Patricia (Tishie) Schwartz; his son, William (Billy) Schwartz, daughter-in-law Lindsey; his adorned grandson, Stephen, and his loyal, loving dogs, Lola and Bear. In Lieu of flowers, contributions can be made to: The Gift of Life House, Philadelphia, PA Make A Wish Mid-Atlantic A celebration of life for Steve will be held in North Carolina on a later date. Memories and condolences may be left for the family at www.brunswickfuneralservice.com. Brunswick Funeral Service, Southport/Oak Island