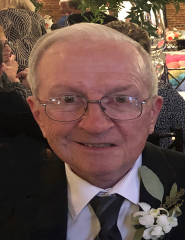 Tom was a veteran of the Army National Guard and a dedicated and loyal employee of Graybar Electric for more than thirty years.  He took great pride in his work and had a strong sense of responsibility to do his best daily.  His promotion to Operations Manager with Graybar led him to relocate from Detroit, MI to Greenville, SC.  He loved being outdoors, whether that time was spent on the golf course, the beach, or simply walking in his neighborhood.  He was a man of few words, but they were always good ones, and most often witty with a half-smile. He also had a deep love for music, especially Frank Sinatra, Nate King Cole, Neil Diamond, The Eagles and The Rolling Stones.  He was a loving husband and father and took a strong sense of honor and pride in his family. He fought nobly through his battle with cancer and won, and was overjoyed to meet his first grandchild one month prior to his passing.

A Memorial Mass will be held at 10:30 AM Saturday February 15, 2020 at Prince of Peace Catholic Church in Taylors, South Carolina.  A luncheon will follow for family/friends at his daughter’s home.

On-line condolences may be sent to brunswickfuneralservice.com.

In lieu of flowers, memorials may be sent to the Fischer House Foundation (fisherhouse.org).