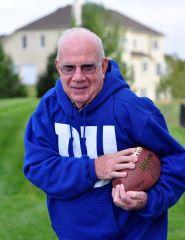 Thomas Patrick Behan, 85, of North Carolina, formerly of Old Bridge, and Bordentown, New Jersey, passed away on September 6, 2021.  Born in the Bronx, NY in 1936, he was the son of the late Thomas and Margaret Behan.

Thomas proudly served in the United States Navy from 1954-1962 in active and inactive duty.  Thomas was a member of the American Legion, Veterans of Foreign Wars, Knights of Columbus and the Elks Lodge. He was also a member of the Ancient Order of Hibernians, Fraternal Order of Police, Navy League, The Emerald Society, Tin Can Sailors, The New Jersey Naval Militia Joint Command, The Shields, PBA, and the USS Benner Group.

Thomas earned a Bachelor of Science Degree in Management at Kean University while working at Bristol-Myers Squibb.  After 25 years of corporate life, Thomas retired in 1994 to pursue a career in law enforcement.  He graduated the Cape May Police Academy and worked at the New Jersey Department of Corrections as well as the State of New Jersey as a Senior Parole Officer.  He retired in 2001.

He was recognized and received many awards throughout his life. He received a New Jersey Naval Militia Joint Command Certificate of Recognition for Outstanding Contributions to our Country’s Defense in Support of Noble Eagle, State of NY Medal for Merit, Certificate of Recognition of Service during the Cold War in Peace and Stability for this Nation, and State of New Jersey Commendation Medal for Excellent Service in Citation and, of course, BEST DAD AWARD of which he was most proud.

Thomas will be forever remembered for being a great man who always lit up a room with his smile, a joke, and larger than life personality.

Thomas is preceded in death by his sons Thomas Charles Behan and Bryan Joseph Behan.  He is survived by his daughter Erin J. Hahn and her husband Christopher, and his daughter Karen K. Smith and her husband Richard; grandchildren Christopher J. Hahn, Nicholas P. Hahn, Richard T. Smith and Dayton J. Smith, in addition to many dear friends and family here and across the pond in Ireland.

In lieu of flowers, donations in his memory can be made to St. Jude Children’s Hospital, New Jersey Special Olympics or Shriners Hospitals for Children.