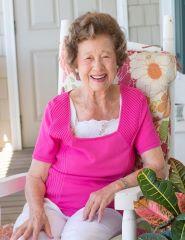 Virginia Alma Williamson, 98, passed away on December 24, 2020 at her home in Ocean Isle Beach. Born in Horry County, SC, she was a daughter of the late Olin Cox and Martha Todd Cox. In addition to her parents, she was preceded in death by her husband, Odell Williamson, and several siblings.

She and her husband were instrumental in a multitude of projects including the development of Ocean Isle Beach and several golf courses. They were also benefactors to the Brunswick County School System and Brunswick Community College. One of her personal projects was Ocean Isle Beach Chapel which remains as a legacy to her strong faith in Jesus Christ.

Private family services will be conducted on Wednesday in Ocean Isle Chapel. Private entombment will follow in the family mausoleum.