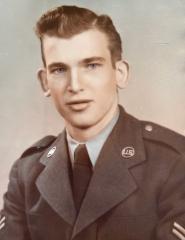 Born in Clinton, IL on September 29, 1931 he was a son of the late George Timmermann and Catherine Wellen Timmermann. In addition to his parents he was predeceased by his first wife, Kay Timmermann and a son, Christopher Timmermann.

He retired from the United States Air Force with the rank of Master Sergeant and later retired as a Communication Specialist with the Federal Government. He was a member of the Calabash VFW Post #7288 and was past commanders of American Legion in Clinton, MD prior to locating to Carolina Shores. He was active in the Boys and Girls Club in Clinton, MD.

Burial will be in the Cheltenham National Cemetery in Cheltenham, MD at a later date.