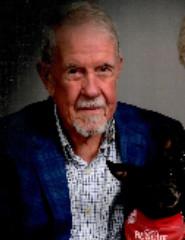 William Porter Sing was born in Charlotte, North Carolina on September 24, 1933. He attended Mecklenburg County Schools and graduated from Berryhill High School in Charlotte. He went on to further his education at Charlotte College and Wake Forest College, from where he graduated in 1958. He was a member of Sigma Phi Epsilon fraternity while at Wake Forest College.

Most of his business career was spent working in the food industry. He worked for Pilot Brokerage Company in Charlotte during his early career. He later moved to Boxford, Massachusetts and became National Sales Manager for Gorton’s of Gloucester in Massachusetts. In 1975, he moved to Raleigh and opened his own food Brokerage Company, Bill Sing and Associates. After retiring from the food business, he started a postage stamp vending business that he managed into his later years.

In 1997, he and his wife Linda moved to Ocean Isle Beach to the house that they built in 1978. He loved living on the coast of North Carolina. He was a lifelong animal lover who had many pets throughout the course of his life. He and his beloved little dog, Lulu, enjoyed riding on their golf cart to the east end of Ocean Isle to take walks by the Intercoastal Waterway.

He was preceded in death by his older son, William Porter Sing, Jr. He is survived by his wife of 53 years, Linda; his younger son, Stuart Lee Sing; his daughter-in-law, Dr. Jenny Sing; his beloved grandchildren, Isabella, T.J. and Juliette and by his little dog, Lulu.

Online condolences may be sent to the family at www.brunswickfuneralservice.com.